Things NOT TO SAY TO A PREGNANT WOMAN

My sister is pregnant and has about 7 weeks to go. The following is a list of actual things that actual people have said to her. If I could, I would personally track down these people and punch them in the stomach on her behalf. Instead, I will just list them here and ask you to please never say stuff like this to a pregnant woman:

1. Wednesday, March 21: The lady at the dry cleaner's asks, "Any day now?"
2. Wednesday, March 21: The lady in the mall food court asks, "You're just about ready, huh?"
3. Saturday, March 24: A waiter at a wedding asks if she has about 2 weeks left.
4. Monday, March 26: Random man walking through the hospital parking lot says, "Looks like it's going to be any day now!"
5. Thursday, March 29: As she was getting out of her car, a random man said, "Wow! You look like you should be going to the hospital instead of work."
Organized by Memphis Urban Sketchers at 1:07 PM 6 comments:

Thanks for the shout-out Steph of The Chockleys. Here's a list of a few of my pet peeves in return. It is by no means a comprehensive list, nor is it in order:

1. Saying a book is "entitled" - books aren't entitled to anything! The only time you use "entitle" with a book is if you are saying that the author gave a title to a book. (This mostly comes from working at Bookstar for 2 years)

2. When people use big words when they don't need to - like saying "utilize" when they could say "use" or "verbiage" when they could say ANYTHING OTHER THAN VERBIAGE. By the way, if any of you who fall in this category are reading this, here is the definition of verbiage: "Speech or writing that uses too many words or excessively technical expressions."

5. Things that are either made to look like food, or are called food, but are not edible, like "diaper cakes."
Organized by Memphis Urban Sketchers at 1:01 PM 8 comments:

My Weekend: Art Openings and Ass-Kickings

1. Friday night went to an art opening: Paul Behnke's Sallynoogin Drawings and Dwayne Butcher's Art Made With a Ring at Marshall Arts. What a great show! I especially enjoyed all of the grids. 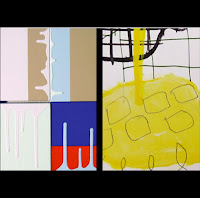 2. After dinner with the Saucier, Mr. & Mrs. Click(Daily) and Dr. George at the always fabulous India Palace, we went to Dwayne's birthday party - he's 30, how cute is that?! At his & G's house I discovered that they have the best refrigerator magnets I've ever seen.

3. Saturday, after spending the day in denial about how anxious I was about the rollerderby bout, I went out there and totally kicked ass. The Legion of Zoom beat the Women of Mass Destruction 143-135 - it was close! But we fought hard to keep the lead. Here is maybe the best rollerderby picture ever. Roxy Codone, on the right with her face on the floor, got right back up and asked ME if I was okay! 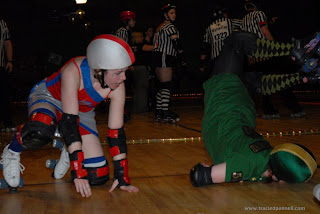 4. Sunday I moaned and groaned a lot. Winning kicked my ass, but from now on I will be used to it!

(Next bout - Saturday April 14 - DOUBLE HEADER! - get your tickets now - www.memphisrollerderby.com)
Organized by Memphis Urban Sketchers at 9:49 AM No comments:

What I Did on My Spring Break

Or, What I Did Visiting My Sister in Ft. Lauderdale

• Might have seen Hal Holbrook at the Memphis Airport. Whoever it was, he was talking loudly on his cell phone.
• Ate meatloaf made by my brother-in-law, Keith
• Went to a free-standing Dairy Queen that is right around the corner from my sister’s house – I’m so jealous since the only Dairy Queen in Memphis is at the Wolfchase Mall.
• Slept late
• Ate at the Cheesecake Factory for the first time and the second time
• Fell while walking down Las Olas, a very busy street, but popped right back up like I was skating or something.
•Went to a Christmas store – it was very tacky and kind of scary, but the guy who worked there walked Katherine and me individually to our car with an umbrella because it was raining so hard – he was like an elf!
• Ate at a Mexican restaurant, which should come as no surprise to anyone who knows my sister
• Went to downtown Ft. Lauderdale, walked along the riverwalk and saw a new public art project by Dan Corson – it is a lighting project in a plaza and is fun to interact with or just to look at.
• Went to a baby shower for my sister thrown by her friend Jenn. Here are a few things Jenn had at the shower:
*** Publix cake
*** Diaper “cake”
*** Chocolate chip cookies and chocolate chip cookies half dipped in chocolate because my sister insisted on having chocolate desserts because “fruit is breakfast or a snack”
*** Keepsake onesie for everyone to sign
*** Corsage for Katherine – pink gingham with a stuffed cartoony baby in the middle
*** A medal for Katherine
*** Gifts for the grandmothers and for Keith
*** Pink M&M’s
*** Pink Rice Krispie treats
*** Sherbert punch
*** 2-bite brownies with white icing and green sprinkles (it was St. Patrick’s Day)
*** Green pea-in-the-pod pins that pertained to 2 different shower games (I won one of them!)
*** Cars and coloring books for the kids
• Sorted and counted all of the clothes for the Little Lady – believe it or not I didn’t just do that for fun, but to really see what Katherine still needs. It was totally fun, though.
• Went to the Ft. Lauderdale Art Museum and saw an exhibit called “Chicano”, one about the Highwaymen, and one about William Glackens.
• Ate one of the best shrimp po-boys I’ve ever had at Shuck 'N Dive Cajun Cafe.
• Just hung out with my sister, driving around, shopping, watching TV – that was all probably my favorite part.
Organized by Memphis Urban Sketchers at 11:16 AM 2 comments:

Why I Think "Stranger Than Fiction" Was Made Just for Me

1. It stars Will Ferrell.
2. The soundtrack is by Spoon.
3. He writes in a moleskine notebook.
4. There are lots of grids in the movie.
5. The counting! The numbers! The math in his head! Me! Me! Me!
Organized by Memphis Urban Sketchers at 9:46 PM 7 comments:

1. One of the best movies ever.
2. What is more fun than watching Pretty in Pink and saying every line along with them?
3. Andrew McCarthy = Hot.
4. James Spader = Best Villian Ever.
5. When I watched the movie as a teenager, it always pissed me off that she had a car.
6. The high school kids all look like they are 35 and I don't really care.
7. The "richies" were some sort of super-special evil - no ambiguity there.
8. I love that there was a whole big scene of her designing and actually making her dress - that there was that much time devoted to a creative endeavor. Same as in "Some Kind of Wonderful" in which the almost-as-cute-as-Andrew-McCarthy Eric Stoltz makes a painting and uses it to woo the popular girl.
9. I always hoped that after that kiss at the end they went back into the prom and told everybody to suck it.
10. Andrew McCarthy = Hot.
Organized by Memphis Urban Sketchers at 12:18 PM 10 comments:

Cool Things That Happened This Week

3. Gave a presentation to the professional art practices class at University of Memphis. 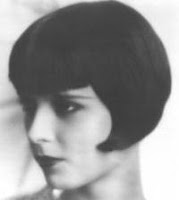 5. Got flowers from my sister. 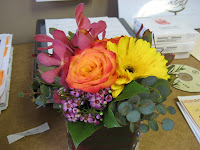 6. The Memphis in May poster was unveiled at a great party. Lots of my friends and family showed up to support me and I even gave a speech! 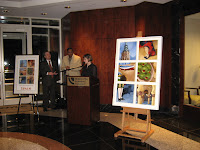 Auxiliary List:
Cool Things That Will Happen This Week

1. Hopefully I will finish "Extremely Loud & Incredibly Close" by Jonathan Safran Foer, since bookclub is on Monday.

2. Lunch at the Calvary Waffle Shop with the girls.

Organized by Memphis Urban Sketchers at 10:50 AM 2 comments: