Words and Phrases Used by a Consultant at a Recent Meeting

Things That Are Missed in Midtown Memphis

This list can probably be added onto continually forever, but these are just a few (or 22) things that I have thought of that used to be in Midtown but are no longer. I didn't frequent all of these places myself but know others who did, plus there are probably a ton of things I left off. And these only date as far back as 1990. They are in no particular order, except for #1, which is really #1.

1. The Antenna Club: Where I watched The Wayback Machine and Judge Crater, and realized I was just about to fall in love with the man who would become my husband.
2. River City Doughnuts: Diagonal to the Antenna on Madison Ave., it was a good place for a pre-show snack, or for lunch!
3. Lam Hung: A few doors down from River City Doughnuts in that little strip mall. It was the first place I ever ate Chinese food and liked it, and it just had a weird Midtown vibe.
4. Decadence Manor: Closer to Belvedere on Madison - are you noticing a theme here? Cool place. Cool owner.
5. Babylon Cafe: I didn't go here much because you couldn't smoke inside and in 1990 I was all about smoking.
6. Red Square: I don't remember if I ever went there, but I know the rest of you did, though you may not remember it!
7. Recovery Road: Where under-aged kids could see The Wayback Machine.
8. Salvation Army at Crosstown.
9. The Occasion Shop: I know Click(Daily) and a lot of other Midtowners got their wedding rings there.
10. Giovanni's: Keeping with the wedding theme - LOTS of people got engaged there. It was a good restaurant - good food, good atmosphere. It's a shame the owners moved from the Cleveland location to Park before closing for good.
11. That Italian Place on Poplar: I can't remember the name of it, but it was just west of Belvedere kind of where the Taco Bell is now - there has always been one there (at least since 1990) but at some point they tore down the old one and built a new one, but anyway - the Italian place had good chicken cacciatore, and bands played there sometimes because apparently if you serve food in Midtown you also have to let bands play there.
12. Squash Blossom.
13. Cancun Mexican Restaurant: When it was on Cooper across from where Bari is now - the building burned down a few years ago. It was big and loud and cheap.
14. Mega Market: Okay no one really misses Mega Market, but when I needed it most they had the largest quantity of ramen noodles for a dollar.
15. Romeo's Pizza: My brother introduced me to Romeo's - he actually bought me some dinners there when I had no food!
16. Silky Sullivan's patio: Another place to see The Wayback Machine. They were on the western edge of Overton Square. What is there now? A parking lot? They had a small Statue of Liberty that got stolen. I still sometimes wonder where that went.
17. Melos Taverna: I miss the restaurant, the food, and the tiny, grumpy but very cute old man who ran it.
18. TGI Fridays: I can't help it - I got a little nostalgic after reading this review on Dining with Monkeys.
19. Robert E. Lee Antique Mall: When it was the Robert E. Lee, not when it was Kate's - it was much better then.
20. The Cupboard: Yeah yeah I know they just moved down the street to where the old Shoney's was that I worked at for one night, but we all know that the food and atmosphere were better at the old place next to the Kimbrough.
21. Anderton's: A more recent loss, but felt strongly nonetheless.
22. The graffiti wall on Madison: I am very anti-graffiti, and maybe I will list those reasons for you one day, but this wall on Madison was an exception. The wall is still there - just east of the P&H next to (what was?) the BellSouth building (I think?). For a long time it had a giant "MEAT IS MURDER" painted on it (ah, the 90's), until someone painted over it so that it said "MEAT IS YUMMY".
Organized by Memphis Urban Sketchers at 12:29 PM 14 comments: 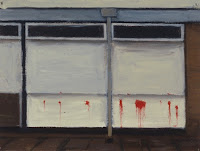 1. Exquisitely painted
2. They are all small - around 8" x 11"
3. No frames - just little nails in the corners
4. Every brush stroke has a purpose
5. Amazing but subtle colors
6. Simple and unpretentious
7. At the Clough-Hanson Gallery through February 21 - go see it
Organized by Memphis Urban Sketchers at 2:32 PM No comments:

Why Judging the Mid-South Scholastic Art Awards is Awesome

1. Getting to spend two whole days hanging out at the Brooks Museum

2. Getting to spend two days hanging out with local artists Veda Reed 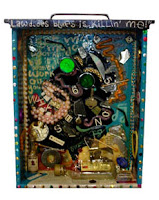 Things That Would Have Made Painting the Bathroom Easier

1. If I had not tried to tackle the walls and the woodwork in one weekend.
2. If I had not picked bright white for the woodwork, and super-dark brown (espresso) for the walls, which made me have to go back and fix obvious mistakes. (It is an amazing color combination, though - looks great!)
3. If my shoulder that I broke last year worked properly, like without hurting when I use it a lot.
4. If during the last 87 years one of the previous owners of this house had not painted the woodwork in the bathroom booger yellow.
5. If, instead of being a perfectionist, I was a I-guess-that-will-do-ist.
Organized by Memphis Urban Sketchers at 2:14 PM 1 comment:

Words and Phrases Used at an Art-Related Meeting Yesterday

What We Talked About at Bookclub Last Night 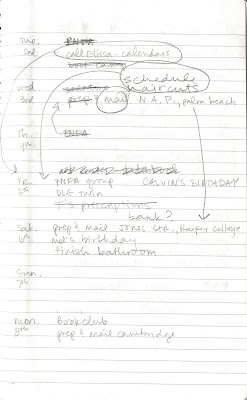 Things That Were Talked About at Tonight's Art Openings

1. Peanut butter and jelly
2. Peanut butter on sesame seed bagels
3. Peanut butter and jelly and chips
4. Pimiento cheese
5. Using encaustic paint
6. Painkillers
7. Rollerderby
8. New Year's resolutions
9. (just nodding and smiling)
10. How the city school system should be done away with and built back up from scratch
11. How nobody really likes doing stuff on Friday nights
12. Rollerderby
13. The intimate scale and setting of the paintings
14. Work
15. Red and orange
16. The fact that the city of Germantown has such tiny street signs on their great big streets
17. Viral infections
18. Great big tape recorders
19. Diet Coke
20. Red dots
Organized by Memphis Urban Sketchers at 9:36 PM No comments:

A few things about C:
1. He is the first of many nephews and nieces.
2. He turns 9 today.
3. He screamed like a banshee after he was born.
4. He's super smart and very literal.
5. He's an excellent artist.
6. One time he called me "Elizabeth with the silly glasses."
7. Sometimes I can't believe how much he's like his dad was when we were kids.
8. He likes to hang out with the grown-ups, and to stay up late.
9. His laugh, when something has really caught him off guard, is the sweetest most genuine laugh you'll ever hear.
Organized by Memphis Urban Sketchers at 9:54 AM No comments:

Now Playing on My iPod Shuffle

How I Am Both Really Smart and Really Stupid

1. Smart: I, default tech person of a non-profit organization, and an art major, figured out how to put our new computers onto our old network. That is the equivalent of doing algebra. Seriously.

2. Stupid: It turns out, just because I didn't have the password for that computer didn't mean we couldn't still access it from our computers. Who knew?!

3. Stooooopid: Apparently there is a feature on pc's where you do not need a password. All I had to do was hit enter.
Organized by Memphis Urban Sketchers at 3:10 PM No comments:

1. At the grocery store I dropped a blueberry yogurt and it exploded on my pants. This was not the first thing that happened, but it was the least irritating, as I have already stated that I do not mind doing laundry.

2. After picking up our new work computers (that part was definitely not irritating!) I decided to feast on some fish tacos at nearby Las Tortugas, but when I got there it was closed until January 8th. I knew I shouldn't have gone back to work this week.

3. To emphasize that I shouldn't have gone back to work this week, while I was attempting to set up our new computers (as the default "tech person" because my husband used to work with computers), I accidently caused our main computer, the one with all of the files on it, to shut down and require signing in with a password - a password that I do not know and do not have written down - causing me to have to call the actual tech people, the ones who charge us money, the ones I was trying to avoid having to call so often by getting new computers.
Organized by Memphis Urban Sketchers at 9:03 PM 6 comments:

1. First notes from my one and only sculpture class. 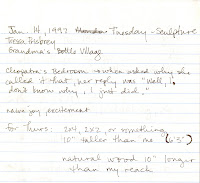 2. Invitation to my BFA show. This is awesome because for the past 8 years I have been unable to remember the names of most of the people I graduated with. 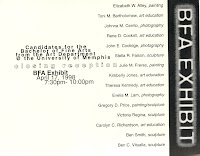 3. You just have to see it to believe it. 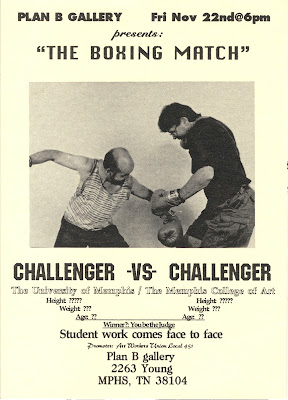 Places I Went
1. January – New York City – T had bizness, I looked at art, we froze our butts off and ice skated.
2. February – South Florida – I had bizness, stayed with my sister, drove back and forth from Ft. Lauderdale to West Palm Beach, and to Naples to see the folks.
3. April – Chicago – With the girls!
4. April – Las Vegas – T had more bizness.
5. May – New York City – More biz! More art! More food!
6. June – Calgary, Canada – Yes more biz. Lots of overly friendly Canadians. More art. The zoo. A couple of movies.
7. July – Statesboro, GA – My grandmother’s 75th birthday with the whole family.
8. October – San Francisco – T ran a marathon.
9. November – Greensboro, GA – Thanksgiving with the family.

Places I Went with my Arm in a Sling
1. Chicago – Where I was alternately insisting on being self-sufficient, and getting irritated when no one would automatically help me do stuff.
2. Las Vegas – Where my story about what happened to my arm was that I got into a fight with a slot machine.
3. New York – Where I was not cut any slack for having one arm in a sling. Still had to get out of everyone’s way fast!
Organized by Memphis Urban Sketchers at 9:12 AM No comments: